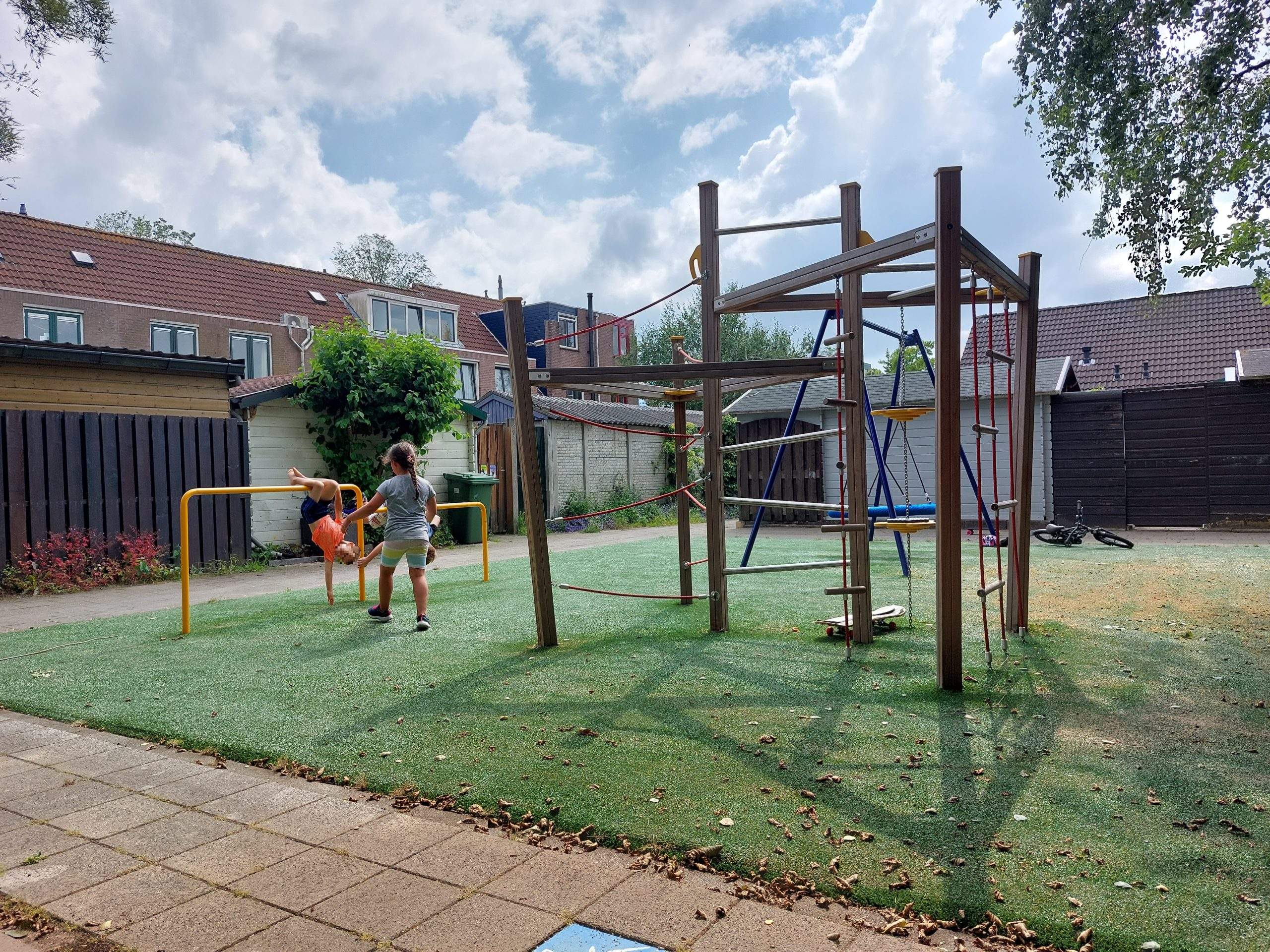 Thank you to Gerben Helleman, author of the blog Urban Springtime and Researcher Public Space and Child-friendly Cities at The Hague University of Applied Sciences, for providing this post.

Fortunately, more and more municipalities are working on play-friendly public spaces. However, many policy visions and investments are still based on assumptions made by municipal officials or suppliers of play equipment. This is partly because good evaluations and effect measurement of existing and new play spaces are scarce, especially where informal play spaces are concerned. And when children are involved, they are often asked about their theoretical wishes rather than their concrete actions. To really gain insight into children’s outdoor play, it is important to look at their actual behaviour. In this article I will share preliminary results from an ongoing study in the Netherlands focused on the child’s perspective. It’s based on a presentation I gave at the Child in the City conference 2022 in Dublin.

Free play in public space is a unique activity for kids. Without adult intervention they can choose their own location, play form and friends to play with. Based on a literature review (Helleman, 2018), I identified twelve reasons why playing outside is important (see figure). In brief: outdoor play is important for the personal development of kids, for their health, and it is also a lot of fun. You can read more about these reasons in this article: Playable cities: Why? 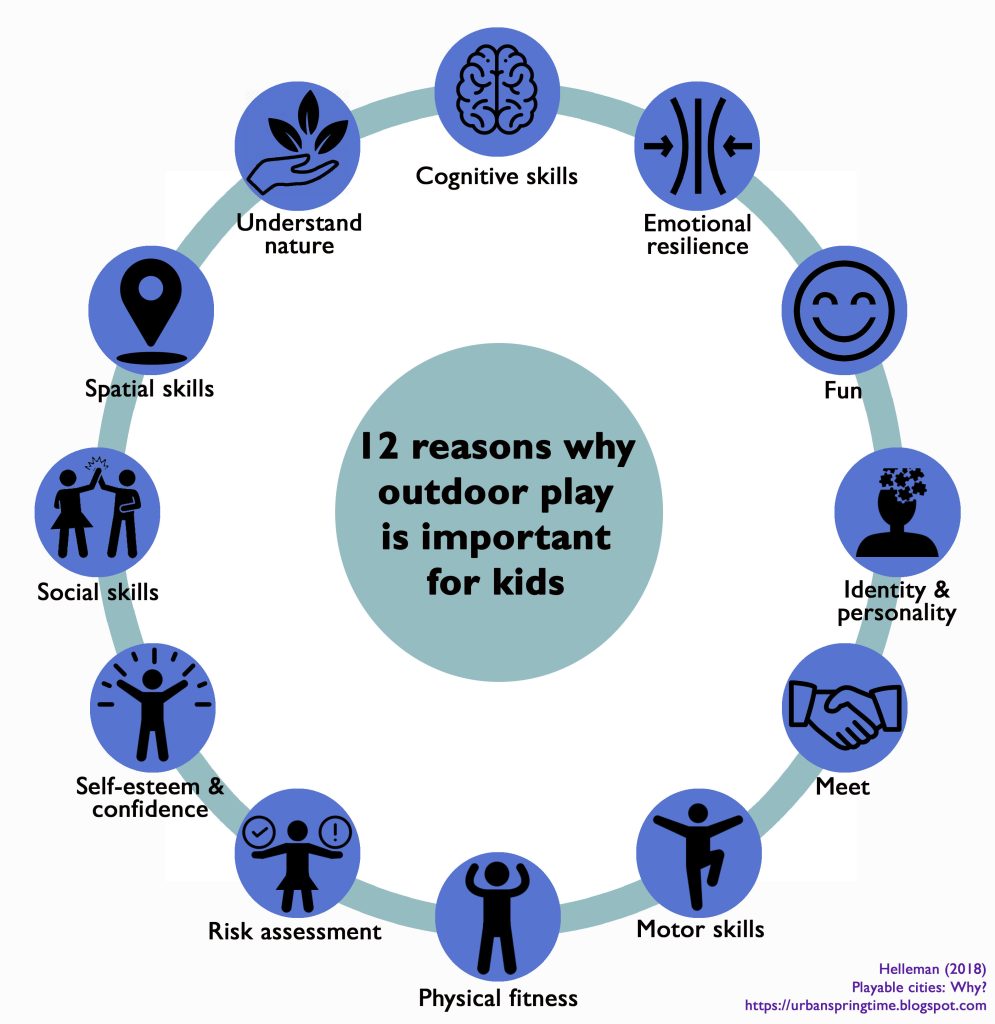 Despite these benefits, fewer and fewer children are playing outside. Especially when you compare today’s children with their parents and grandparents. Research in the Netherlands shows that 69 percent of grandparents played outside more than inside when they were young (Kantar Public, 2018). Nowadays it is only 10 percent; instead 53% of children spend more time playing indoors than outdoors.

This is one of the reasons why we have started a research study on outdoor play of primary school children (4-12 years old) within three neighborhoods in three different cities (Amsterdam, The Hague and Delft) in the Netherlands. Our main research question is: which factors can positively influence the use of outdoor space for playing and how can municipalities make a positive contribution to this? The research is still ongoing, but we have already conducted a literature review on factors that influence outdoor play behaviour. And we have been counting and observing in public space to find answers to these questions: who plays outside? Where do children play? And what kind of activities are they doing?
In the next few months, we will also be working together with kids from different primary schools to talk with them about how they experience the public space. And how they fill in the public space for their wishes and needs using methods like photovoice and walk-along. At the end of the two-year study we aim toprovide recommendations for municipalities, but also for urban planners and designers.

On the basis of the literature review, I have made an initial overview of important factors that influence outdoor play, divided into four groups (see figure below). 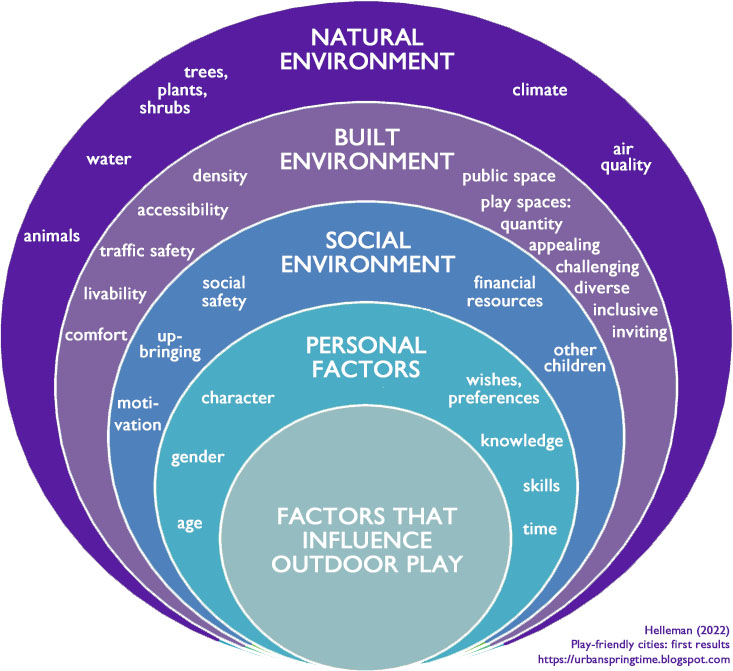 In our research study, we want to test and specify the above factors.

Documenting children’s outdoor play
As mentioned before, if you want to gain insight into children’s outdoor play you must document the actual behavior of children. We are doing this in three neighborhoods in Amsterdam, The Hague and Delft. Each neighborhood has been divided in smaller areas and these areas are visited multiple times in the afternoon after school and in dry weather. As researchers we register the location where the child is playing and after observing for a few minutes we fill out a short survey about who was playing, where they were playing and what types of play were occurring.

We are only halfway through this documentation process, but based on 747 observations so far, there are several patterns we have observed. First of all, we have observed slightly more boys (58%) than girls (42%) playing outdoors. This is in line with previous studies in the Netherlands and Belgium.

If we look at age, we mainly encountered children between the ages of five and eight (53%) and between the ages of nine and twelve (24%). The ages at which, in general, children play outside more often. At this age they also have freedom given by their parents to play at a greater distance from their own home. This increases their range and options. This is not the case with younger children; more adults were physically present among younger children than among the older children. Most of the times these adults were not there to play with their kids, but to supervise – at an appropriate distance on a bench, for example. In addition, the girls were more ‘supervised’ than boys; 52% of girls were supervised whereas only 38% of boys were. 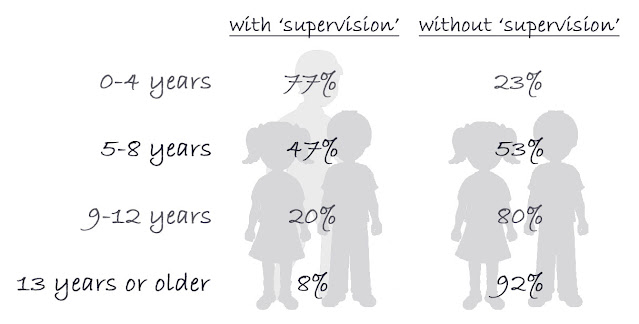 If we combine gender and age, an interesting picture emerges. In the younger age group – from zero to eight years – the ratio between boys and girls was almost equal. However, large differences arise with age. Girls aged nine or older were playing less in public space than their male peers (earlier I described several causes and solutions for this distinction: Girls and outdoor play: looking for more equality and equity)

We also counted where the children were playing. Just over half of the children were playing in formal play areas such as a playground, sports field or schoolyard (after schooltime). A total of 43% played in areas that were not set up as such – the so-called informal play spaces – especially on the sidewalk or in a public inner courtyard. Looking to gender, we saw on average an equal distribution between boys and girls in the playgrounds and on the sidewalks, while boys dominated the sports fields and lawns.

We then looked at what the children were doing in these different places. Interestingly, twenty percent of the children were doing ‘nothing’. So instead of actively playing, they were relaxing, socializing, hanging out, sitting, watching or talking to other children (also known as restorative play). For example, girls would sit in a swing basket without swinging. The ball sports – the second largest activity – were especially popular among older boys. 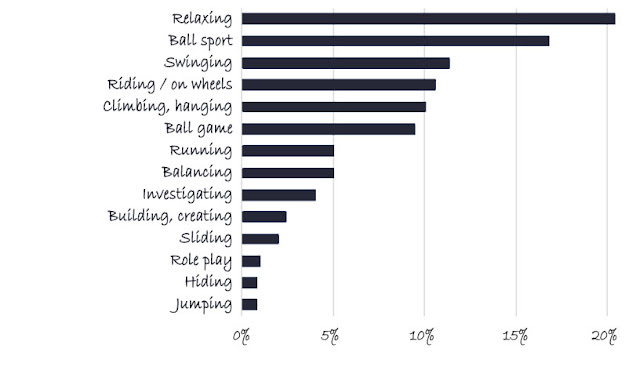 I would like to conclude with five general observations we noted during our walks.

The first observation has been noted many times before, but is worth mentioning again: the enormous similarity of our formal play spaces. You see the same kind of slides and seesaws everywhere. Different reasons are often cited as the cause of this uniformity: it must be maintenance-free because this saves costs, and it should be safe and vandal-proof. Whatever the reasons, the consequence is that we see the same type of playgrounds in every neighborhood. Build with little variation or challenges. 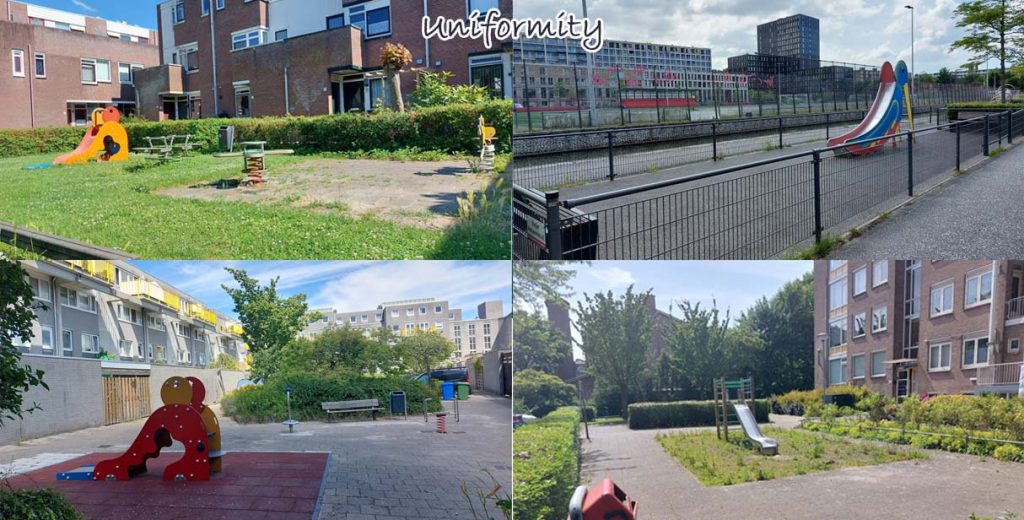 Secondly, the trend that I would like to call ‘compensating’; almost everywhere we walked, we saw play attributes that were added to the public space by residents themselves, possibly due to a shortage of close-by play facilities. We came across trampolines everywhere., in varying shape and quality. We also observed multiple basketball hoops, swings and plastic slides for small children. 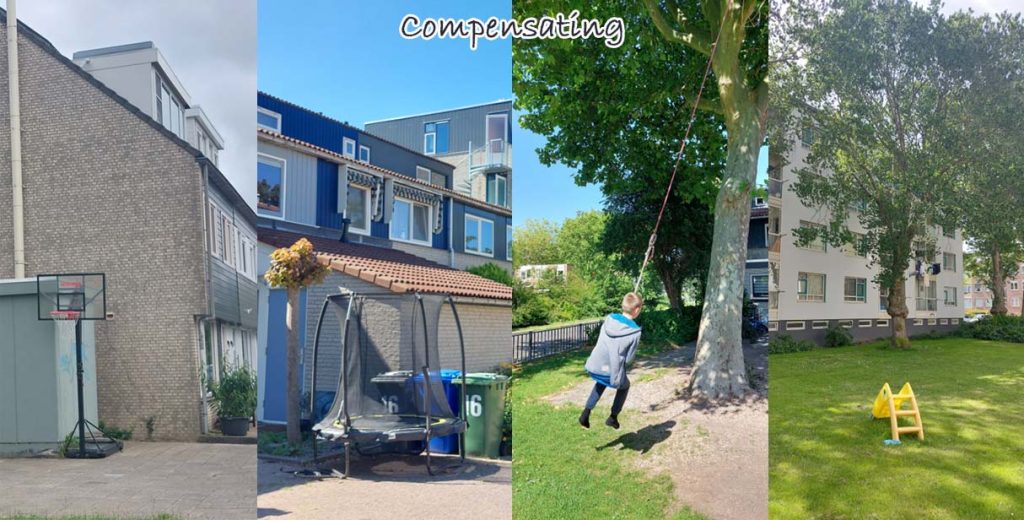 The third observation is about supervision. Parents like to supervise their child for social safety reasons. As we saw before they do this by being physically present at play areas, but they also do this by informal supervision. From their home parents would check every so often to see if everything is all right. This emphasizes the importance of clear sightlines to play areas. The famous urban sociologist Jane Jacobs (1961) called it ‘eyes on the street’. I would like to add ‘ears on the street’ to that, because often parents would also monitor their children on the basis of sounds; listening from their balcony, open window or backyard. 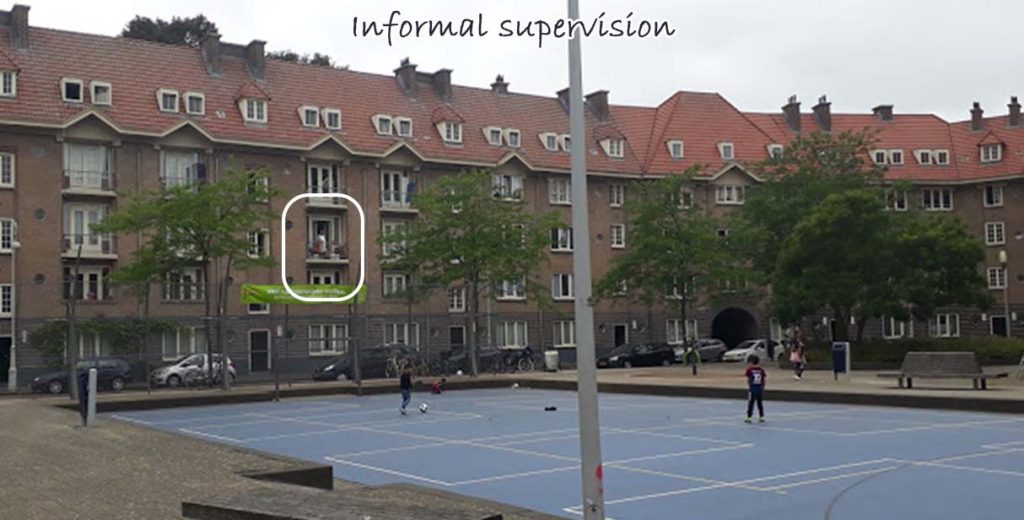 The fourth observation is about the loss of public space over time. We see that public space and play areas are increasingly closed off. Schoolyards often close their gates after school, so that their playgrounds cannot be used by local residents. But also courtyards that were open for the public in the past are increasingly closed off by means of fences, hedges and signs. And it goes one step further. Over the past twenty years urban renewal has led to the removal of natural spaces altogether in some neighborhoods. After the demolition of multi-family homes and the new construction of single-family homes the former semi-public courtyards are being exchanged for shielded parking spaces, private gardens, or enclosed courtyards with gates to which only residents have the key. 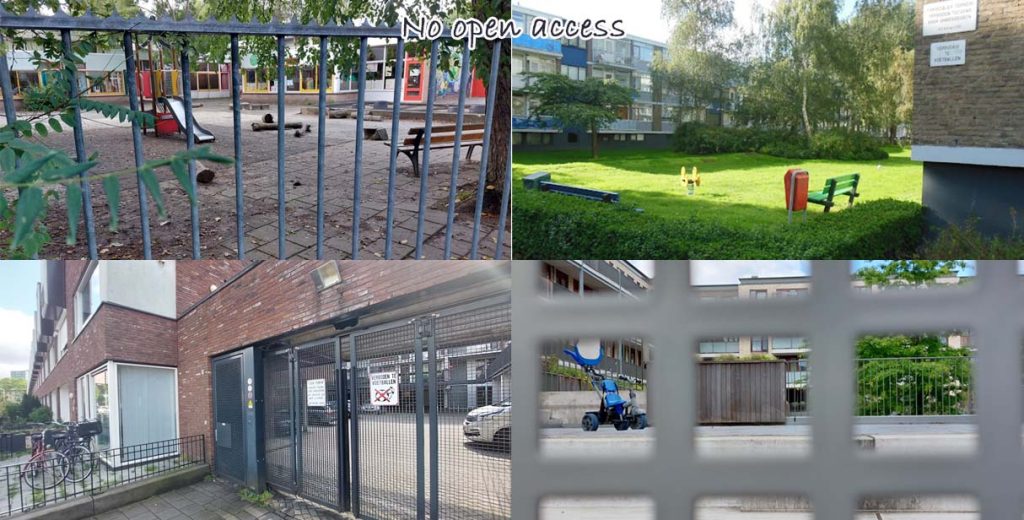 The last observation is about those new enclosed courtyards. These were designed by architects with the philosophy of child-friendly cities. Children can play safely on their own property with their neighbors. There are no cars and no unauthorized persons. Parents are happy with it because it makes them feel safe. But who really benefits? Maybe we should call it parent-friendly instead of child-friendly? After all, playing outside now takes place in a closed area. For me it is another form of the privatization of playing, a reserve, a protected area. Children remain in a certain bubble and therefore do not go on an adventure through their own neighbourhood. In the second half of the study, we hope to discuss this observation with parents and children. 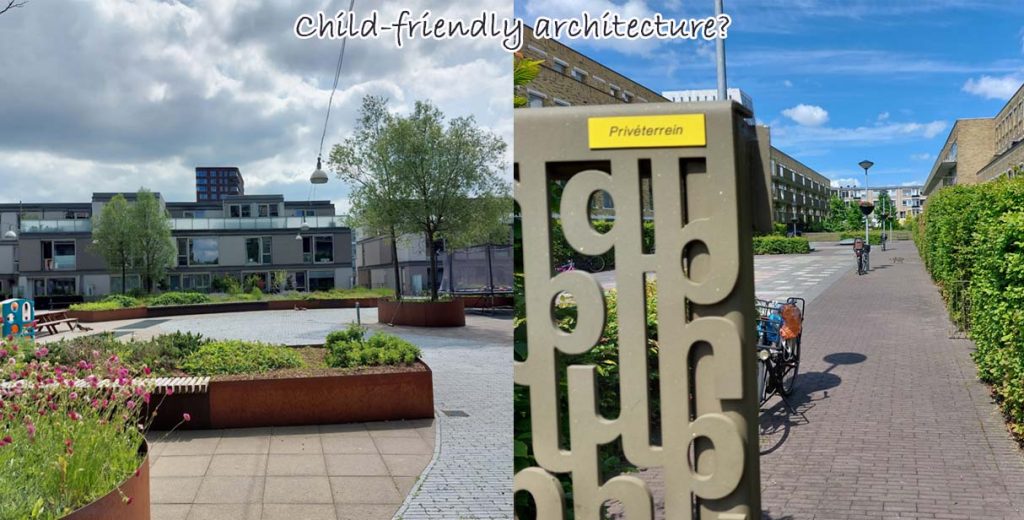 This research is co-financed by Regieorgaan SIA, part of the Netherlands Organization for Scientific Research (NWO).

Gerben Helleman is an urban geographer and researcher in the field of public space and child-friendly cities at The Hague University of Applied Sciences. He is project leader of the above research, about which he gave a presentation during the Child in the City conference in Dublin. He regularly writes on his blog Urban Springtime about urban issues.

We use cookies to ensure that we give you the best experience on our website. If you continue to use this site we will assume that you are happy with it.Ok